Can you write a story in just 12 words? 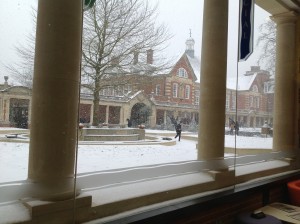 This year we’re taking part in the ’12 Words of Winter’ competition, which challenges people to write a story on the theme of winter in 12 words. The story doesn’t have to rhyme.

Think you can do better? Then email the library with your entry by midday on Thursday 5th December. There will be prizes for the best entries and the best overall pupil entry will then be entered into the national competition to compete against the winners from other schools across the country.

Here is a sample of our entries:

‘Someone meddled with Santa’s minced pies, he fell asleep and later died’

Remember it doesn’t have to rhyme!

Tomorrow we look forward to welcoming around 50 fellow school librarians for an exciting day of sharing ideas, listening to speakers and discussing school library issues.

We look forward to welcoming the following speakers:

Workshops in the Mallinson Library:

You will also have the opportunity to talk to:

If you would like to Tweet on the day we are suggesting using the hashtag #HMClib13 so that I can storify tweets from the day – bringing together all your thoughts and ideas in an easily readable format.

I’ve just discovered this fantastic book recommendation site. Five Books asks authors and experts to recommend the best books in their subject. In an interview they then discuss why the books are important and what they are about. You can browse by topic or interview or search for a particular book or author/expert. It covers a huge range of subjects range from Espionage to The Mind and Comedy to How to Be Good.

Try Tom Holland on Ancient Rome, Jo Nesbo on Norwegian Crime Writing or Marcus du Sautoy on The Beauty of Maths. There’s a whole section on Being a Parent and plenty of Fiction suggestions too. Definitely something for everyone on this very attractive website.

If you would like the Library to order any of the books you discover or want to check stock email library@wellingoncollege.org.uk  or drop into the library.