We do love a big list of books and hope all of you are just as keen to spot your favourites and find new reading inspiration in the next chunk of the poll. Below we have listed all the books that polled more than vote. The next blog post will reveal all the remaining books voted for by one person. Thank you to everyone who voted and enjoy this incredibly eclectic list of books. Happy reading! Visit the library to borrow copies of these books.

Here is the list of our top 20 most popular books:

Lord of the Rings by J. R. R. Tolkien

The Kite Runner by Khaled Hosseini

The Girl on the Train by Paula Hawkins

A Monster Calls by Patrick Ness

The Hitchhiker’s Guide to the Galaxy by Douglas Adams

Any Human Heart by William Boyd

Heart of Darkness by Joseph Conrad

More than this by Patrick Ness

Sapiens: a brief history of humankind by Yuval N. Harari

The Bell Jar by Sylvia Plath

The Girl with the Dragon Tattoo by Stieg Larsson

The Goldfinch by Donna Tartt

The Secret History by Donna Tartt

The Book Thief by Markus Zusak

Everything everything by Nicola Yoon

I am Pilgrim by Terry Hayes

Life of Pi by Yann Martel

Lord of the Flies by William Golding

Me Before You by Jojo Moyes

Of Mice and Men by John Steinbeck

Ready Player One by Ernest Cline

The circle by Dave Eggers

The Far Away Tree by Enid Blyton

The Giver by Lois Lowry

The Night Circus by Erin Morgenstern

The outsiders by S. E. Hinton

The Chronicles of Narnia by C. S. Lewis

12 Years a Slave by Solomon Northup

A Court of Mist and Fury by Sarah J. Maas

A Farewell to Arms by Ernest Hemingway

A Short History of Nearly Everything by Bill Bryson

A Universe from Nothing by Lawrence M. Krauss

All the light we cannot see by Anthony Doerr

Alone on a wide wide sea by Michael Morpurgo

Charlotte’s Web by E. B. White

Children of the Lamp by P. B. Kerr

Crime and Punishment by Fyodor Dostoyevksy

Diary of a Wimpy Kid by Jeff Kinney

Do No Harm: Stories of Life, Death, and Brain Surgery by Henry Marsh

Freakonomics: a rogue economist explores the hidden side of everything by Steven D. Levitt and Stephen J. Dubner

Grapes of Wrath by John Steinbeck

Guess How Much I Love You by Sam McBratney

How to be a woman by Caitlin Moran

How to build a girl by Caitlin Moran

Notes from a Small Island by Bill Bryson

Once by Morris Gleitzman

One Hundred Years of Solitude by Gabriel Garcia Marquez

Percy Jackson and the Sea of Monsters by Rick Riordan

Since You’ve Been Gone by Morgan Matson

Tess of the D’Urbervilles by Thomas Hardy

The Boy on the Top of the Mountain by John Boyne

The Cellist of Sarajevo by Steven Galloway

The Chrysalids by John Wyndham

The Elephant Vanishes by Haruki Murakami

The Four Agreements by Miguel Ruiz

The Master and Margarita by Mikhail Bulgakov

The Name of the Rose by Umberto Eco

The Old Man and the Sea by Ernest Hemingway

The Selection by Kiera Cass

The Selfish Gene by Richard Dawkins

The Simpsons and Their Mathematical Secrets by Simon Singh

There will be lies by Nick Lake

War and Peace by Leo Tolstoy

We Need to Talk About Kevin by Lionel Shriver

Your fathers, where are they? And the prophets, do they live forever? by Dave Eggers

Far from the Madding Crowd by Thomas Hardy

The Siege by Helen Dunmore

The History Boys by Alan Bennett

What If? Serious scientific answers to absurd hypothetical questions by Randall Munroe 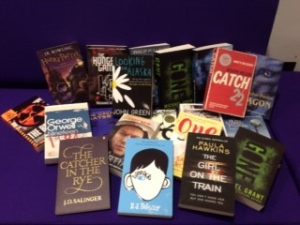 Perhaps it isn’t such a big surprise that the Harry Potter series tops the list nevertheless it is fantastic that the series that captured children and adult imaginations everywhere remains incredibly popular. Good to see Michael Grant, our visiting author from last Monday is as popular as ever with his young adult series ‘Gone’ and that Old Wellingtonian Sebastian Faulks makes it into the top 20 with his wonderful wartime novel ‘Birdsong’.

Here is the list of our top 20 most popular books:

We canvassed staff and student opinion about their favourite books of all time through a short survey allowing from 1 – 5 titles to be proposed. It was a completely free vote permitting all genres of book from any time period or location – ranging from children’s picture books to graphic novels, biography to fantasy. This has generated a list of around 660 books!

We counted a series as a single book as people generally voted for a series rather than one of the named individual books. Where deciders were needed we used library issue figures to determine popularity.

We’re looking forward to publicising these popular titles and looking at the list in greater detail –  for example looking at top ten most popular authors, picture books, biographies and so on.

Watch this space for more to come and the full list!